Menelik’s bush buck (Tragelaphus scriptus Menelik’s) is among 12 endemic large animals found in Ethiopia. The present study was conducted to determine population status, age structure and identify major conservation challenge to the Menelik’s bush buck in Hawotu forest. Data were collected from August, 2010 to February 2011 including wet and dry seasons. The study area was stratified in to three habitat type (Riverine, Natural Forest and Erica Forest) based on elevation and vegetation cover of the study area. Age structure and total counting of individuals were made along each transect. Data were collected by focus group discussion and questionnaire survey. Individual count was used to determine the current population size, seasonal distribution, and sex and age structure of Menelik’s bush buck. The collected data was analyzed using descriptive statistics and compared with chi-square test. The average number of bush buck in the study area was 29 and 22 during the wet and dry season, respectively. There was no significant between the wet and dry seasons in the population size (x2 =2.96, df =1, p˃ 0.05). Of the total observed, 37.3% male, 51% female and, 11.8% were young. There was no statistical difference between the number of males and females (x2 = 0.34, df =4, p˃005). The sex ratio of males to females was 1:1.36 during wet and dry seasons. There was no significant difference between the number of adult males and females (x2= 0.1, df =2, p˃0.05). The ratio of female to young was 1:4.33 and there was no significant different in the ratio observed during the wet and dry season (x2=0.24, df=2, p˃0.05). Major threats for Menelik’s bush buck recorded in the study area were overgrazing, agricultural land expansion and human disturbance. Hence timely intervention is required to address these problems and conserving the population of Menelik’s bush buck (Tragelaphus scriptus Menelik’s). 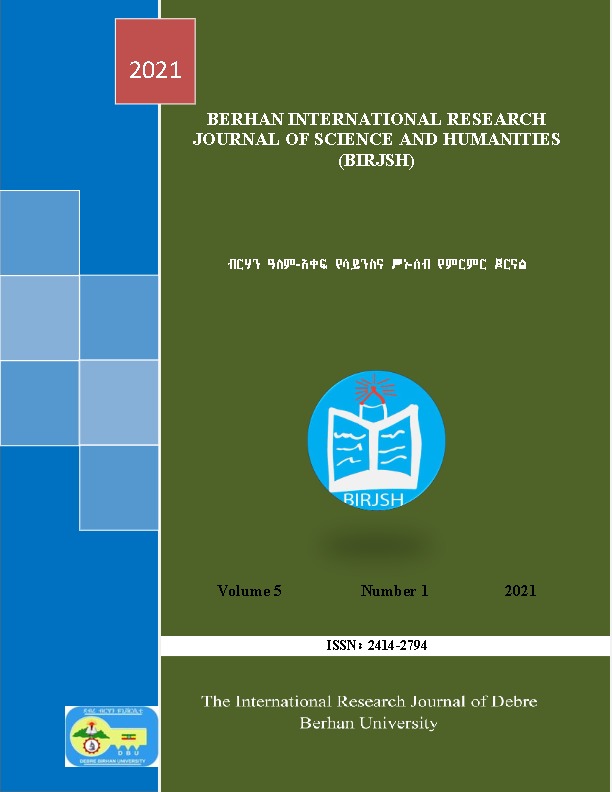 This work is licensed under a Creative Commons Attribution-NonCommercial-NoDerivatives 4.0 International License.

Copyright © 2022 BIRJSH.
All Rights Reserved!
All credits and honors to PKP community for their freely available Open Journal System (OJS).